Skip to content
Jen aims to amaze, engage, inspire and motivate her audiences to generate positive change for themselves, their organizations, and their communities.

“Jen was thoughtful and responsive in planning, took the time to understand our audience and their unique needs, and customized her presentation accordingly. And she was awesome on-site! She was clear, patient, encouraging, and fun. People left energized and inspired by both the actual practice and deep metaphors of juggling. I totally recommend Jen!”

With degrees in both engineering and art, Jen connects with both left and right brained learners as she shares her story of finding balance and transitioning from life as a structural engineer to entertainer, speaker and trainer, roles in which she felt she could have more impact, exercise more creativity, and be more connected to others.

Jen has appeared on the Late Show with David Letterman, Good Day Philadelphia, Huffington Post Live and the Food Network, presented at TEDx, won the International Jugglers’ Association’s Award for creativity, and has been called an “expert juggler” by the New York Times. She co-created and co-starred in the Off-Broadway show and Backstage Critic’s Pick, Perfect Catch: A Throw-mantic Comedy, which was hailed as “the forward guard of an entirely new and captivating approach to the craft.”

She is grateful for the opportunity to now share lessons learned from over 20 years of juggling life as a professional entertainer, engineer and artist in her keynotes and staff training sessions for top companies like these and empower her audiences with tools to become more effective jugglers in their own lives and work!

This week, over 600 wedding and special event planners are gathered together in Zacatecas, Mexico at the Congreso LatinoAmericano De Bodas y Eventos Especiales for a few days...

I speak often about balancing and creating change – it’s a juggling act that requires continuous practice and focus. Lately, I’ve been feeling extra “busy” and challenged in my...

Whatever big goals we are working to accomplish, we can’t do it alone. Participants in my interactive sessions quickly realize that it’s possible to reach bigger goals more quickly –...

I’m thrilled to share feedback from meeting planners at the New Jersey North Chapter of the International Special Events Society after a recent event with their meeting and event...

The start of the new year is a time for reflecting on what we accomplished over the past year, where we fell short, and what we can do...

“Jennifer’s juggling as a metaphor for balancing work and life priorities and collaboration left a lasting impression for our team. We’ve received a lot of positive feedback on... END_OF_DOCUMENT_TOKEN_TO_BE_REPLACED

“Our President and CEO marveled at Jen’s uncanny ability to deliver the message we hoped for. It is without hesitation I recommend Jen as a presenter and educator... END_OF_DOCUMENT_TOKEN_TO_BE_REPLACED

“Jen Slaw saunters onto stage and captures our attention with a style that is all her own: hip, classy, and just that right amount of sexy.”   –... END_OF_DOCUMENT_TOKEN_TO_BE_REPLACED

“Jen added such a terrific angle to our retreat for foundation executive directors.  She was thoughtful and responsive in planning, took the time to understand our audience and... END_OF_DOCUMENT_TOKEN_TO_BE_REPLACED 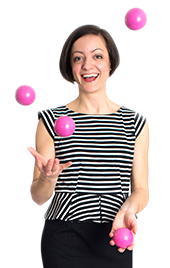